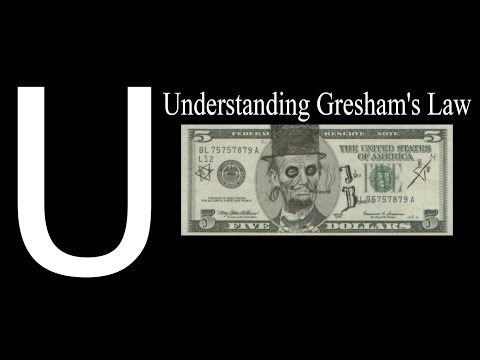 The Re-levance of Greshams Law: Bitcoin and Ideal Money

The Re-levance of Greshams Law: Bitcoin and Ideal Money /r/Bitcoin

The Re-levance of Gresham’s Law: Bitcoin and Ideal Money


Here we can remember the classic ancient economics saying called “Gresham’s law” which was “the bad money drives out the good”. The saying of Gresham’s is mostly of interest here because it illustrates the “old” or “classical” concept of “bad money” and this can be contrasted with more recent attitudes which have been very much influenced by the Keynesians and by the result of their influence on government policies since the 30s.~John Nash, Ideal Money


In the previous article I showed the relevance of Gresham’s Law to bitcoin and specifically the (false) block-size debate that a certain faction are attempting to focus the community’s awareness on. I highlighted the absurdity of claiming that money could be simultaneously and rationally hoarded AND circulated. This is the fallacy of the big-blocker debate, and Gresham’s law reveals the nature of money that big-blockers do not understand.
Now we highlight the REAL relevance and meaning behind 20 years of John Nash’s lectures and writings on the subject of what is “Ideal Money?” and “How might it be brought about?”
Nash argues that with the introduction of a stably issued e-currency our global financial system would asymptotically trend towards order: Ideal Money.
He explicitly states that he is purposefully obfuscating his thesis in order to not appear to go too far against the agenda of central banks, central authorities, and namely the US government:


I had arranged for 2012 to talk more cautiously in relation to whatever would impact with “the Keynesians” and with the political interest relating also to the scholarly factions allied with (or forming) “the Keynesians”.
…let us define “Keynesian” to be descriptive of a “school of thought” that originated at the time of the devaluations of the pound and the dollar in the early 30’s of the 20th century. Then, more specifically, a “Keynesian” would favor the existence of a “manipulative” state establishment of central bank and treasury which would continuously seek to achieve “economics welfare” objectives with comparatively little regard for the long term reputation of the national currency….~John Nash, Ideal Money


He didn’t want to be unjustly “condemned” (again) for espousing what will be known as pure reason in the face of our society’s mistaken beliefs on how the global economy SHOULD be designed to operate.
The question is not, and was never intended to be “Is John Nash Satoshi?” nor were those ever my true sentiments (no media has contacted me for my opinion, in this regard, on the material that only I seemed to have traversed).
The questions we need to be asking ourselves are “Why did Nash tour the world for 20 years talking about how to issue an e-currency in order to bring about Ideal Money?” “What is Ideal Money?” and “How might Ideal Money be brought about?”
There are no other important questions:


But the famous classical “Gresham’s Law” also reveals the intrinsic difficulty. Thus “good money” will not naturally supplant and replace “bad money” by a simple Darwinian superiority of competitive species. Rather than that, it must be that the good things are established by the voluntary choice of human agencies.~John Nash Ideal Money

CMV: Bitcoin's replacement of all other currencies reign as monopoly over the global economy is inevitable

Currencies compete with one another based on their monetary properties. The role of currency is to serve as a ledger of account for an economy. Looking at past examples of intra-currency competition shows that whichever one has superior monetary properties will win out. See Their's Law. Also see Gresham's law
Bitcoin is a new entrant to the currency market, and has properties unlike any other currency, most notably its supply is unexpandable beyond a fixed limit and is immortal (due to its decentralized nature). As such Bitcoin will compete against all other currencies gaining market share until 100%. Furthermore, its large network-effect lead protects it from all other crypto competitors--in other words, it takes a large advantage in monetary properties to overcome an established currency and while Bitcoin is overcoming that to currencies like USD and gold, it is not possible to have enough advantage over Bitcoin to scale it's moat as it is too close to "perfect" money--e.g. a perfect ledger


This is a footnote from the CMV moderators. We'd like to remind you of a couple of things. Firstly, please read through our rules. If you see a comment that has broken one, it is more effective to report it than downvote it. Speaking of which, downvotes don't change views! Any questions or concerns? Feel free to message us. Happy CMVing!

Why Bitcoin will prevail over fiat: Gresham's Law

https://fs.blog/2009/12/mental-model-greshams-law/
"Bad money (paper fiat) always chases out good money(bitcoin) from circulation"
Meaning over the long term, bitcoin hodlers will prevail while those who hold fiat will ultimately perish in value as people spend their paper money while hodling bitcoin.
This phenomenon can be noticed in Roman times where they used close to pure silver coins known as Denarius for currency initially but debase their currency to pay for war and public works. Their debased coins were spent, while pure silvegold coins were kept.
http://money.visualcapitalist.com/currency-and-the-collapse-of-the-roman-empire/

By holding and not spending BTC you're actually preventing circulation and adoption. HODLers are contributing to Bitcoin's decline. A perfect example of Gresham's law.

Greshams Law states (roughly) that bad (fiat inflatable) money drives out good (stable uninflatable). I don't know if this has been discussed before, but doesn't this imply that Bitcoin will tend to be hoarded and thus never replace fiat as a medium of exchange?
So people will use fiat to pay for coffee, groceries and what not while hoarding Bitcoin for savings.
Thus it will never actually get used.

World Crypto Network - Gresham's Law in Bitcoin to the Max

Gresham's law(Bad money drives out good money), when everyone is hodling, how Bitcoin is dealing with this problem?

I feel Gresham's law acting on me : I don't even want to buy a beer in Bitcoin because the amount will be worth too much in a few months/years.

Well, I know that hodling is the smartest move about Bitcoin. Specially if you still into fiat money, what explains your patience to see it worth ten thousand times the value you purchased just to sell for money again.
I think differently. Of course I hodl a bit of it, but my major usage of Bitcoin is making the system work. I turn it into an ecosystem to a point that in some time we won’t be needing fiat anymore.
Currently I buy beer and pizza with Bitcoin, the only two things in my town that accept it. I want to make the ecosystem pulse. There’s a restaurant being opened here that will accept it as well. I’ll start being a regular. I want too see a Bitworld!

Understanding Gresham's Law and Its Relation to (Deflationary ) Bitcoin

Gresham Law Explains Why Altcoins Will Spit Upon Bitcoin’s Grave

Gresham Law Explains Why Altcoins Will Spit Upon Bitcoin’s Grave

Even if bitcoin worked better, it is in a Catch-22 because of Gresham’s law, the nostrum that bad money drives out good. Given the choice of spending inflationary government-issued money or something which holds its value, everyone would spend the bad paper stuff and hoard the bitcoin. Not necessarily. It could also be a sign of Gresham’s law in action. People are funneling bad money (dollars) into good money (Bitcoin). Good money doesn’t circulate as much as bad money does. In the case of Bitcoin, people who see its true potential will not sell their Bitcoin at all except if their lives depended on it. Gresham’s Law and Bitcoin. Written by Syndicated Publisher No Comments June 22, 2018 Rather suddenly, the state issued fiat currency bolivar lost 99% of its purchasing power. Gresham’s law holds that “bad money drives out good money, ” meaning that given a choice of currencies (broadly speaking, “money” that serves as a store of value and a means of exchange), people use ... Over the last few years there have been a number of papers and blog post on Gresham’s law and bitcoin.Most of these have rudely proclaimed that bitcoin will die because of Gresham’s law–ironically, it will be fiat currencies that will die because of that law, not bitcoin. This is because the real value of fiat money is always going to be lower than the real utility value of bitcoin. Then, too, Gresham’s Law stipulates that “good” money will be saved, rather than spent. That is exactly what we see with Bitcoin. Forensic studies of transaction activity show the majority of Bitcoin investment is held, rather than traded or spent back into circulation. Investors tend to buy Bitcoin to hold it, forever, as a permanent store of value.